GOD THROUGH BINOCULARS -- A HITCHHIKER AT A MONASTERY 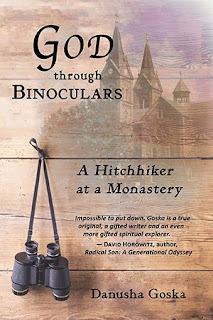 Danusha Goska is a writer, essayist, and memoirist who has written some of the most engaging prose I've read in the last 20 years.  Every book and every essay she writes draws me, gets me thinking, shakes me up in some way that always finally helps me see things with the clarity she brings to every topic.

In her most recent book, God through Binoculars: A Hitchhiker at a Monastery (available at Amazon), she does it again as she writers about a spiritual quest she undertook.  The great books about such journeys never give you easy answers.  They don't say, "Do these 10 things and you will find peace or faith or salvation." Goska knows this truth.  She has lived this truth.  As you read this beautifully written, witty, and inspiring book, you will find yourself not only following her journey, you will find yourself living your own journey.

Here is an except from Goska's powerful book. 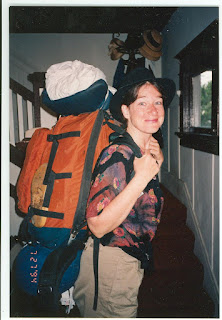 The Dudh Kosi or River of Milk drains Mount Everest. It glimmers in its gorge, turquoise and silver. I once trekked along it, to a spot where it joined one of its seven sister rivers. The confluence of rivers is sacred in Hinduism. I encountered a sannyasi seated in lotus position in the sand and gravel at the place where the rivers joined. Sannyasis' renunciation of the world is so severe that they perform their own funerals before taking to the wilderness. This sannyasi was naked except for ashes. His limbs were as slim and slack as jute ropes. His dreadlocked hair was piled atop his head. Once he had taken his vow, that hair was never again combed or cut. There was nothing anywhere near him except for the fierce V of mountains rising up thousands of feet from the rushing river's bed.

The rise of those mountains was an act of aggression to me. As I trekked, I felt the mountains to be my enemies, eager to cause me pain, thwart and humiliate me. And yet I adored their beauty. The Himalayas are active; they grow a couple of inches every year, as the Indian subcontinent pushes into the Asian landmass. There were no people; I was the lone other. There were only the parrots down low in the gorge, winging, carefree, from river bank to river bank, their highway air; their concern with the pitch of the mountains minimal. Then, rising higher, there would be crows, then, still higher, lammergeier, vultures that eat bone. The mountains bullied even sunlight; it visited only in slants.

The sannyasi said nothing to me, and I said nothing to him. I thought of everything he had renounced, from peanut M&Ms to romantic comedies to the contents of the Encyclopedia Britannica to crying over a broken heart to worrying about the future to telling a friend about last night's dream. What did he receive in exchange? I wondered what he knew, if anything. I kept walking. I was on my way to a Peace Corps conference, the closest thing to a Roman orgy I'd ever know. We'd eat till sick, dance, flirt, copulate. That sannyasi would be with me, every moment. I'd be thinking of him. What does he know that I cannot access?

I just googled "Dudh Kosi" to revisit this river in photos. I see that now it hosts organized white-water rafters. I wonder what the sannyasi makes of them. I wonder if he ever thinks of me; no, not really; of course I know that he has never thought of me. I think of him often.

I have long had this question: are contemplatives, the Desert Fathers, the Desert Mothers, and all those who leave society and go off on their lonesome – Tibetan monks, Hindu sadhus, Buddha, John the Baptist – are they truly holy? Or are they merely crabby misfits who couldn't get laid and are too lazy or soul-dead to engage in conventional hygiene?

That's where God was. God was not in the special effects: not in the wind, the broken rocks, or the earthquake. God was in the "still, small voice" that Elijah had to leave society, and enter the wilderness, to hear. A quote from the Desert Fathers and Mothers: "Stay in your cell, and your cell will teach you everything." I respect staying in one's cell for short stretches. It's the lifelong rejection of society that gives me pause.

We tend to stereotype urban life as stressful, and country living in wide-open spaces as healthy and stress-free. My mother grew up in a village in Slovakia. I visited Kovarce in the 1970s and it was postcard-perfect. Kovarce was surrounded by fields of blue rye and red poppies. Clouds of white butterflies rose into the sky. In the hills, wild boar announced their presence with heavy pants. And the cuckoo – such a tender punctuation to the drawn-out ripple of the breeze caressing leaves. Uncle John built an indoor toilet for our visit; before that, all he had was an outhouse. He didn't even have a refrigerator. When he wanted something to eat, he didn't stand in front of a cold, white light and stare at leftovers. He went into his backyard and dug up his meal, or picked it, or chopped off its head.
My mother grew up in that idyllic, rural setting. She told me that there was one guy in the village who didn't fit in. He hung himself. She and her brother Joe peeked in the window. She remembered the corpse's black tongue sticking out of its mouth. The entire village came out for his funeral, as they did for all funerals. They marched in the funeral procession. They sang loudly, as they always did – Slovaks do love to sing – and they wailed loudly, as they always did. She told me that if anyone had paid that kind of loving attention to this poor misfit before he died, he probably wouldn't have killed himself.

I grew up on stories like that. Village beatings, murders, feuds, conspiracies, and chicken thieves – and this was just our own family. I knew that the perfect rural image is not what urbanites want it to be.

Contrary to what we moderns want to believe about our "stressful" urban lives, and rural peace and tranquility, rural people are far more likely to commit suicide than urban ones. Young, rural Americans are almost twice as likely to kill themselves as young, urban Americans. It seems that there may be something salubrious about spending time around other people, and something stressful about being alone in the back of the beyond.
________________

Danusha Goska's God Through Binoculars -- A Hitchhiker at a Monastery is available as a paperback or kindle at Amazon.

Posted by John Guzlowski at 10:53 AM No comments: