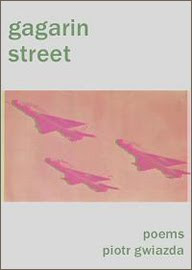 I've been posting about the Polish Diaspora for a while now, and what always brings me pleasure is the realization of how many fine writers and artists there are who share a Polish background.

Recently, I've met one of these writers online. His name is Piotr Gwiazda, and he came to the US from Poland in 1991. He's a reviewer, a translator, a university professor, and a poet.

His recent book Gagarin Street has the creative energy that I've seen in writers like Milosz, Szymborska, and Herbert. Gwiazda's book -- combining nostalgia and apocalyptic visions -- offers us a vision of a disappearing world folding in upon itself. It's like nothing else I've seen since William Burroughs.

You've got to take a look at Gwiazda's poems:

When I was a child I lived on Gagarin Street.
Today it’s called Pilsudski Street.
Ten years ago the sun rose, a little wind blew, a little bird sang,
a little empire fifty kilometers away
fell, and so did its heroes: Lenin, Dzerzhinsky,
Bierut. This one, though, makes you pause for a moment
after his lonely voyage in spinning Vostok
after his tumble from orbit, his fifty-fifty chance of survival.
After all, he was our hero—this they taught us
in middle school—“our” meaning all of us, all of the world.
Not so. Today his space-suit rots
in a museum basement, his Russian face with Soviet smile
disappears from history textbooks, his round-the-globe celebrity
revoked (unanimously) by a municipal
subcommittee. Well, I suppose that’s how history is made
or unmade. Nothing is certain till it becomes history
and then it is unmade. I’ve been carrying
this city in my pocket for so many years and today—
look: a hole. What’s happened to it?
Streets are renamed, monuments rededicated,
old heroes buried, still older ones brought back from the dead.
In place of the crumbling soccer stadium, I read in the paper yesterday,
they’re building a new church. Or is it a new stadium
that will replace a church? I can’t tell for sure,
but this I can tell: my city doesn’t recognize me, buildings
give me evasive looks, the Old Town district
(did it get a face-lift?) turns its shabby back on me, the parks I loved
either leased or closed, even Gagarin Street,
now Pilsudski Street, pretends it’s never seen me before
as I cross it, then re-cross it, trying to stir its memory
by taking pictures. Nothing helps!
Granted, some things have stayed the same: Fiats,
kiosks, drunks (though now the homeless
seem to outnumber them), the city-hall clock still strikes twice
at one in the afternoon, and better times are as usual late
for people at the bus stop. The place itself, though,
has changed. I don’t mean the surfaces, I mean
this: passing by the dreary, four-story apartment building
where I once lived, I ask myself
what is real and what is past and therefore
imagined? For I can almost imagine
this is not my hometown at all. Suppose I’m just passing through,
another happy tourist with a rented car
and digital camera (these days you see droves of them
in all Central Europe). Nothing connects me to this place,
nothing keeps me here, nobody waits for me.
After all, it’s only another foreign city and I’ve seen so many,
each slightly different from what I expected.

Days were predictable, times uncertain.
A heat-wave paralyzed the Eastern Seaboard,
the war inched on, Dow Jones kept sliding,
I had just moved to a new city. Every afternoon
I would take walks by myself, learning street names
marking buildings—I read sign boards, posters,
inscriptions under statues, people’s faces
(some would even ask me for directions), strolled
through the cool halls of churches, museums, libraries
with the guilty curiosity of a student
skipping school. So much time,
so little money. I survived on bread and Tolstoy.
In the newspapers, another suicide bombing,
another corporate scandal. Meanwhile,
the sun would rise above the painted harbor,
Tuesday imperceptibly slip into Thursday.
Such bliss. Such misery. I savored my solitude,
I craved company. My pocket notebook
was filled with apocalyptic images. In the West
half of America was on fire.

From Gwiazda's page at the Washington Writers' Publishing House:

Piotr Gwiazda was born in Olsztyn, Poland, in 1973 and came to the United States in 1991. His published works include Gagarin Street (WWPH, 2005) and James Merrill and W.H. Auden: Homosexuality and Poetic Influence (Palgrave Macmillan, 2007). His poems have appeared in many journals, including Barrow Street, Columbia, Drunken Boat, Hotel Amerika, Margie, Rattle, The Southern Review, Talisman, and Washington Square. He has published book reviews in Chicago Review, PN Review, Postmodern Culture, the Times Literary Supplement, and elsewhere. He is an Assistant Professor of English at the University of Maryland Baltimore County, where he teaches courses in modern and contemporary poetry.
Posted by John Guzlowski at 1:01 PM 1 comment:


Hot days the workers
threw open the shop doors
and the neighborhood buzzed
with the rip of their saws
through the seasoned planks
of walnut, birch, and maple.
Pine shavings piled inches
deep on the floor oozed sap
over the steel-toes of the aproned man
who stood hours turning scrollwork
while near him another burnished
stacks of brass cornices and grips,
and the friendliest, saddled
with a sagging belt of hammers,
mouth bristling with nails,
tacked nameplates and sterling crucifixes
to each finished box,
some nearly as long as grandfather's rowboat,
others barely big enough
to hold sister's talking doll,
and after our fathers drove off
to the grind of the second shift
leaving their wives leaning out
windows to tend twisted lines of wash,
we kids on the sidewalk
slapped balls and double-dutched
through the vapor-stink of curing varnish
while over our heads the empty sleeves
and pant legs flapped when our mothers
pulley-squealed them closer
through pitched beams of light
already clogged with dust.


John Bargowski was born and raised in Jersey City and now lives with his family on a small acreage along the Delaware River in the Skylands of northwestern New Jersey. He is the recipient of a 2009 NEA Fellowship in Poetry, a 2000 New Jersey State Council on the Arts Distinguished Artist Fellowship, The Rose Lefcowitz Prize from Poet Lore, and the Theodore Roethke Prize from Poetry Northwest. His work has been published in Poetry, Gettysburg Review, Poet Lore, Southern Poetry Review, Poetry East, Prairie Schooner, & Journal of New Jersey Poets, among others.

This above poem originally appeared in Poetry Northwest.
Posted by John Guzlowski at 11:04 AM 3 comments: