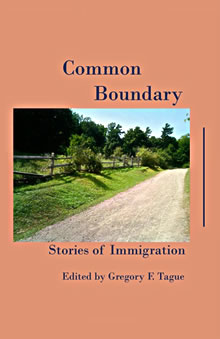 If you're reading this, you probably came to America as an immigrant or your parents did or your grandparents did. You or your people came with little or very little, and the world they found was always strange and often hard and sometimes threatening.

Immigrants, for the most part, don't like to talk about those days. I know my parents didn't. When I would ask my mother as a child what it was like when we came, she would wave me away. Like so many other immigrants, she wanted that past forgotten. Remembering that past was somehow a betrayal of what she wanted to be, an American. She wanted to be an American sharing the real American dream, the one that promises you never have to remember where you came from and how hard the passage here was.

But we can't forget those stories, shouldn't forget them, because some time we'll need them. They are part of our essential legacy, and they tell us that we can survive no matter how hard times are; they tell us we can keep going even when it seems like we'll never succeed, never crawl out of the mess we're in.

Gregory Tague understands how important these stories are. In Common Boundaries: Stories of Immigration, he has gathered together a collection of twenty true stories by twenty immigrants from Poland and Hungary and Mexico and Iran and Morocco and Cuba. (The two essays about Polish immigrants were written by Dagamara J. Kurcz and me.)

These stories are sad and funny and heartbreaking, and they need to be read and passed down because someday we'll need to remember what courage and hope and strength and love can really accomplish when faced with the impossible.

Common Boundary: Stories of Immigration is available from Amazon and Editions Bibliotekos.

To find out more about Common Boundary, please read the recent article in the Brooklyn Eagle.

Further information is also available at the Editions Bibliotekos website.
Posted by John Guzlowski at 1:30 PM No comments:

Barney and Gienka by John Surowiecki 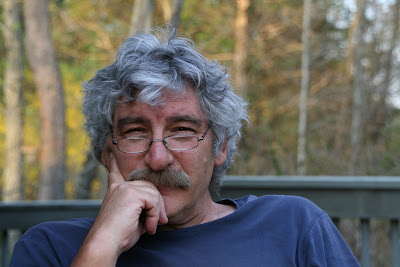 Part Dante’s Virgil and part Groucho Marx, John Surowiecki writes about his Polish-American parents, aunts, and uncles with seriousness and humor, elegance and wit. The narrative of his peoms begins as his father wakes after a stroke and weaves back and forth across the years, taking the reader to pre-war movie theaters, army staging areas in England, a ball-bearing factory in the States, and the small-town Connecticut world his parents lived in after the war.

Where other writers would treat the lives of such working-class people with pointless nostalgia or sentimentality, Mr. Surowiecki reveals real lives in all their cluttered and touching complexity.

This book adds to Mr. Surowiecki considerable achievements which include winning the Poetry Foundation's first Pegasus Award for Verse Drama, the 2006 Washington Prize for Poetry, and the 2007 Pablo Neruda Prize, also for poetry.

Originally, I was going to post "Barney and Gienka," the title poem, but I think "Mr. Szmykleszczwladeczeryniecki’s Funeral [June 13, 1965]" offers a sense of the Polish-American community that is very powerful. There's death and rebirth and joy and suffering in the poem that speaks of the continuity of that community even as the old members pass on.


The foundry workers, who were so loud
and tearful at his wake, sit quietly
in back of the church, stepping
outside now and then to smoke cigarettes
and to hear the shouts and cries
of children playing in the street.

A few people from the St. Casimir Society
remember the time he played Santa Claus,
handing out bright fragrant oranges to children
who handed them back saying they wanted PEZ
dispensers and comic books, not something their
parents brought home every week from the store.

The stained-glass windows of the church
feature portraits of the Holy Family:
Lazarus the uncle, cousins James and Jude,
Martha the worrying aunt, grandmother Ann,
Joseph teaching carpentry to toddler Jesus
and Mary, pained, thinking of what’s to come.

And the glass is so thin it admits the shouts
of the children outside and it shudders and rattles
with the organ’s every throb. It groans as the priest
explains that death ought to be an occasion for joy
and celebration, then sighs, finally, at the squeak
of Mrs. Jablonski’s thin soprano voice.


Barney and Gienka is available at Amazon.

You can also visit his website.
Posted by John Guzlowski at 3:51 PM No comments:

I've had a heart attack recently (you can read about it here) and open heart surgery, and I've fallen behind on my blogging.

There's been a lot of news about the activities of Polish American writers and artists these past few months, and I know that if I don't get it out quickly I'll just get buried under the news that I'll be hearing in the next few months.

So, in no particular order:

Christina Pacosz's recent reading at the Montserrat Poetry Festival, sponsored by KMOS-TV in Warrensburg, Missouri, has been released as an audio file. You can hear 17 minutes of Christina's poetry by clicking here.

Jeremy Edward Shiok will be tracing the journey of his grandfather across the Pacific during World War II. Jeremy will be writing about his experiences and his grandfather's experiences with the US Marine Corps. The website devoted to this project is at Atoll: A Historical Journey to the Central Pacific.

Linda Nemec Foster's Talking Diamonds and Jehanne Dubrow's From the Fever World were finalists for the Book of the Year Awards.

Cherries with Chopin: A Tribute in Verse: An Anthology of Contemporary Poetry edited by Maja Trochimczyk was reviewed recently by Alison Ross in The Clockwise Cat.

Adam Lizakowski's "A Poem about the Rooster" won the $1,000 first place prize in this year’s Elma Stuckey Poetry Contest.

Mark Lewandowski has just published a collection of stories called Halibut Rodeo (All Things That Matter Press). He's also started a blog about the book and other things (mostly about Alaska at this point) at http://halibutrodeo.com.

Grzegorz Wroblewski edited the Polish section of the Cleaves Journal. It's available online. His MEMORY IS THE SAME AS IMAGINATION (I-IV)is available at the New Post Literate: A Gallery of New Asemic Writing.

John Surowiecki's play "My Nose and Me: A TragedyLite or TragiDelight in 33 Scenes," winner of the Poetry Foundation's first Pegasus Award for verse drama, will be published in the Midway Journal this June.

Phil Boiarski is the featured poet in the recent OFF_Anthologie, a new publication from OFF_Press, an organization founded by Polish expats and Englishmen.

John Guzlowski recently published two poems, "A Dog Will" and "What the Tower of Babel Looks Like," in a special issue of Convergence Review devoted to race. His book Lightning and Ashes has also recently been reviewed on the blog Venus Febriculosa. The review also includes his poem "Here's What My Mother Won't Talk About."

The picture above is of a tree and a field in Poland.
Posted by John Guzlowski at 10:45 AM No comments:

Essayist Danusha Goska and poet Oriana Ivy have recently started blogging, and their blogs make extremely interesting reading. While Dr. Goska writes thoughtful and entertaining essays on Polish-American culture and the depiction of Poles and Polish Americans, Ms. Ivy posts her own fine poems and her reflections on other poets.

Danusha Goska's blog is called "Bieganski the Blog," and you can get there by clicking here. The current post deals with correspondent Helen Thomas's recent controversial statement regarding Jews returning to Poland.

Oriana Ivy's blog is named "Oriana-Poetry," and you can get there by clicking here. The latest post discusses the term "extreme effort" and features a poem by Ivy called "Ghost Ranch."
Posted by John Guzlowski at 4:33 PM No comments: