I received the following notice:

Responsibilities: The Editor is responsible for the content and quality of each issue of The Polish Review and makes the final decisions relating to the production of each issue. The Editor appoints (with the approval of the PIASA Board of Directors) the Editorial Board, Book Review Editor and other staff, and manages the work of the Editorial Board and Book Review Editor. The Editor actively solicits scholarly contributions to the Review; ensures the integrity of the peer review process and editorial standards for English usage, formatting, scholarly citation and civility; serves as liaison with the production staff and printer; and manages the production schedule for each issue of the Review. The Editor collaborates with and directs numerous assistant editors, guest editors, peer reviewers, and authors.

Qualifications: Required: earned doctorate in the humanities or social sciences; demonstrated teaching and research excellence in a field of Polish studies; excellent communication, organizational, and management skills; ability to work well with a variety of people from various disciplines; familiarity with the requisite computer skills to conduct the normal business of the editorial office through e-mail and other electronic media as needed. Preferred: bi-lingual skills in English and Polish; prior editorial experience.

Terms of Appointment: Initial Appointment is for three years with the possibility of renewals.

Application Process: Applications and nominations—as well as any questions about the position—should be directed by e-mail to the committee chair, Dr. James S. Pula, at: jpula@pnc.edu. Applications will be accepted until the position is filled.
Posted by John Guzlowski at 11:15 AM No comments:

Show Up, Look Good: A New Novel by Mark Wisniewski

Mark Wisniewski, author of Confessionsof a Polish Used Car Salesmen, has recently published his second novel, Show Up, Look Good.  The novel relates the adventures of a young Midwestern woman who hopes to get over a failed relationship by moving to Manhattan.

Here’s what Kelly Cherry, the Poet Laureate of Virginia, says about it:

“This novel about a thirty-something woman who travels from Kankakee, Illinois, to New York to ‘make it’ deepens in unexpected and moving ways. Wisniewski ventriloquizes with perfect pitch his female narrator, who has a real talent for getting into trouble.  Show Up, Look Good  is funny, dark, poignant, and unsettling.”

Here's an excerpt from the novel: 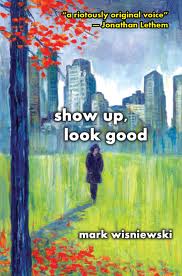 The ground floor window under my room exploded, glass raining onto the sidewalk. Smoke twisted out and rose.
“Joyce better leave,” I said.
Ernest wrote:

FIRE ESCAPE
IN BACK.

“Good,” I said, and he nodded, and I did, too, and I was glad Tino was in Etta’s section of the building’s back yard: with the firemen now inside, I trusted he’d be safe there. Then I wasn’t so sure. To distract myself from worry, I asked Ernest, “What was in your duffel bag?”

I WAS
GOING TO
SELL IT.

Another window exploded, and then they were exploding from left to right, ax-heads popping through them like iron tongues. This is serious, I almost said, but the escaping smoke tapered off. Then axes shattered two second-floor windows. I glanced at Ernest, whose eyes were fixed on the window to my room, and his expression assured me that he, unlike Joyce, knew that heat and smoke ascended, and that he was picturing Joyce dashing through Etta’s dark hallway while his duffel bag remained beside a bra on my floor.
“Excuse me,” I told him.
I crossed the street, accelerated toward the building, and a fireman yelled, “Ma’am. Where you going?”
“I’ve got to get something,” I said. “Just a duffel bag. Before it burns.”
“It’s burning.”
“What if it’s still there?”
“It’s burning. You might as well phone your insurance.”
“I can’t run up and check?”
“We just got everyone out of there. You run up and I lose my job.” He clutched an industrial-size crowbar. “So you’re not running up.”
I nodded and walked back to Ernest. We stood beside each other, neither speaking nor writing, just watching more onslaughts of smoke. Then a hand squeezed my shoulder hard enough to portend rudeness. Joyce? I thought, and I turned and saw Etta pulled up as close to my left as Ernest was to my right.
“Etta,” I said, “can you believe this?”
“Unfortunately,” she said.
“At least we’re out here,” I said, but my insides churned—because if the third floor caught fire, our living arrangement might end. “Tino’s out back,” I said. “In the yard.”
Ernest thickened a period and handed his notepad to me, and Etta read it as I did:

“So do I,” I said.
“What was in his duffel bag?” Etta asked me, and before I could answer, another fire truck rounded the corner. Ernest and I exchanged glances. He shrugged. Then the second-floor window beneath mine exploded without the help of an ax. Inside that room, the tips of flames stretched into view. Ernest’s breathing grew vexed, then worse. He had only so much memorabilia, I was sure, and he was probably picturing his last aged and genuine baseball singe, and his autograph on that baseball could have made someone happy—and helped Ernest afford more of the city. I felt sorry for the person the memorabilia might have made happy, and for Ernest himself. I felt ashamed that I’d fantasized about Letterman while Ernest’s future had burned.
“If the whole building goes,” I said to myself out loud, and then I babbled about how I’d just begun to get my life together, about how Manhattan was the only place open enough to let me be who I really was, and about who knows what else. As I said these things, I used phrases made common on talk shows and felt destined to make an awful impression on Ernest, but I babbled on anyway, and then I tried to explain to Ernest that, for most of my life (which, granted, I added, had been less than half of his), all of my trying and talking and lovemaking and understanding had done nothing but separate me from everyone else. Then I noticed that his breathing had gone silent, and I turned to see his pencil finish a message:

I KNOW
WHAT YOU
MEAN.

“Do you really?”
He nodded, sat on the curb, and watched the flames rise. Then he lay back so that his legs were splayed on the street, his spine flat against a sidewalk dotted by black, discarded gum. He shut his eyes and placed his palms down, one on top of the other, on his chest.
“Will you watch it?” I yelled at a woman who nearly stepped on his head, but she kept on walking, so I hoped for a response from Ernest.
His eyes stayed shut. He can’t, I thought, handle the city right now.
“Ernest?” I tried.
Someone tapped my shoulder: Joyce, hugging Tino, then handing him to Etta. “Ernest is napping,” she said. “He does this wherever he feels.”
Etta glanced over. “Is he okay?” she asked me.
“I’d say he’s felt better,” I said.
“I took CPR at the gym,” a guy on the sidewalk behind us said. “If anyone here can help, it’s me.” This guy was huge, maybe three hundred pounds, and he planted his feet on either side of Ernest’s chest, then crouched so his ass touched Ernest’s abdomen, then rested on it.
“And I’m engaged to this man,” Joyce said. “Do you see what I have to put up with?”
“You’re smothering him,” I told the fat guy.
“I’m helping him,” he said.
“I don’t think so,” I said. “He doesn’t need CPR. It’s a breathing thing.”
He placed a palm on Ernest’s chest and pressed. “It’s his heart,” he said, and I grabbed his gargantuan arm and tried to shove him off of Ernest, but he didn’t budge. I pushed again, using strength I hadn’t expected, and he let go of Ernest’s dwindled shoulders and rolled onto the sidewalk. He was lying beside Ernest, straining to sit up, but I didn’t see him rise: I was hovering over Ernest, pinching his nose and grabbing the skin where his jaw was supposed to be, and lowering the flabby remains of his chin. Then I was descending, hoping Ernest’s eyes would open before our lips touched. Then we were sharing his silence. His mouth was warm, and I exhaled into it, and my palm, on his chest, rose slightly. I won’t have to do this more than twice, I thought, and I inhaled, tasting garlic, halitosis, and cinnamon. I heard glass pelt the sidewalk across the street. I tried not to hear the fat guy, who was shouting at me with instructions. One more time, I told myself, and I’ll hear that troubled breathing. Everything will be exactly the way it was. 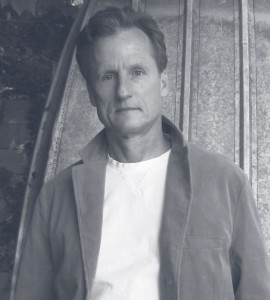 Mark Wisniewski is the author of the novel Confessions of a Polish Used Car Salesman, the collection of short stories All Weekend with the Lights On, and the book of narrative poems One of Us One Night. His fiction has appeared in magazines such as The Southern Review, Antioch Review, Virginia Quarterly Review, TriQuarterly, New England Review, The Gettysburg Review, The Yale Review, The Sun, andThe Georgia Review, and has been anthologized in Pushcart Prize and Best American Short Stories. His narrative poems have appeared in such venues as Poetry International, New York Quarterly, and Poetry. He’s been awarded two Regents’ Fellowships in Fiction, an Isherwood Fellowship in Fiction, and first place in competitions for the Kay Cattarulla Award for Best Short Story, the Gival Press Short Story Award, and the Tobias Wolff Award.

Show Up, Look Good is available from Amazon and Gival Press, the publisher.