Something About by Andrena Zawinski

Poet Andrena Zawinski sent me a note. She would like to sell the remainder of her copies of her recent book Something About. She's offering a special friend's discount rate reducing the price of the book from $15.95 to $10 (postage is $2.38 for one or two books, no tax).

andrena.zawinski (at) att.net -- substituting @ for (at)

Here's the title poem from her book:

Something about these little song sparrows,
their avian tongues and throaty chortles,
the buzzy twittering floundering air
just outside the steamy bedroom window.

Something about this perch beside the pane
to watch day nestle in a moody moonlight.
Posted by John Guzlowski at 6:30 PM No comments:

Dear Friends, Danusha V. Goska has received a contract for the publication of her scholarly book, Bieganski: The Brute Polak Stereotype, Its Role in Polish Jewish Relations and American Popular Culture. The publisher expects the book to be published this year.

Many of you are familiar with Dr. Goska's work from her webpage, from her publications in Polin: Studies in Polish Jewry, New York Folklore, Southern Folklore, Sarmatian Review, 2B: A Journal of Ideas, Ethnic Studies Review, Sojourners, The Sun, and The Journal of Popular Culture. Shofar called one published chapter of Bieganski "groundbreaking."

She has been the recipient of a New Jersey State Council on the Arts Grant for writers, a FLAS scholarship, the William Paterson women's writer's award and the Indiana University Eva Kagan Kans award for writing about an Eastern European woman.

Dr. Goska wrote Bieganski under punishing conditions; a catastrophic illness crippled her and reduced her to penury, but did not stop her.

Given that her book will appear soon, it would be beneficial for Polonia if Dr. Goska were up-to-date on the current status of the Polish-Jewish dialogue. The Kosciuszko Foundation summer session on the Jewish experience in Poland could prepare her for future media appearances.

Dr. Goska has no money of her own to fund this trip and is seeking funds. Allow me to offer my thanks to anyone who can guide Dr. Goska to a source of funding for this vital experience.

I have posted previously about Dr. Goska. Click here to see an excerpt from her work on Bieganski.
Posted by John Guzlowski at 7:36 AM No comments:

I received this regarding a translator's position at the US Holocaust Memorial Museum:

The United States Holocaust Memorial Museum's Oral History Branch is looking for translation specialists for immediate consideration, in order to make their foreign-language collections accessible to researchers. The position is paid, and on the basis of a short-term consultant.

We are particularly looking for translators with excellent Polish skills. At this point, we are also accepting applications from candidates who exclusively work with the language combination English-Polish, Polish-English.

We would appreciate it if you could pass this information on to any qualified candidate you know, so they have the opportunity to apply for this position.

Many thanks in advance.

Writer's and Artist's Residency in Poland

I got the following recently about a residency program in the Bialystok, Poland:

Art Factory Bialystok is an international artist/writer's residence program in the beautiful town of Bialystok, located in the northeastof Poland. The Art Factory Bialystok Writer's Residence is open to all writers published and beginning writers seriously committed to their craft from any countries, writing in English. The residence will take place June 1-30, 2010.

The aim of the residence is to provide the time to develop abody of work, hone that work during workshop-style meetings with the otherparticipants, as well as public readings. Moreover, the program will beenriched by several inspiring day trips to nearby towns, showcasing thecultural and gastronomical diversity of the region.

Cost: 850 PLN (approx. US$300, Euros 200, £190) This includes accomodation, a monthly bus pass for transportation within Bialystok, a historic/architectural tour of Bialystok with an English-speaking guide, aswell as transportation and entrance fees for trips.

Accomodation will be provided in student dormitories with internet access and a shared kitchen. Participants must cover the cost of transportation to and from Bialystok and food.

letter of application stating what you would like to work on during the residence, what you will bring to the residence (personality-wise, work-wise, etc), if you'd ever participated in any sort of residency before, why this residence in particular interests you, current projects,work habits, etc. bio information about you, education, achievements, etc.

Applications are accepted by EMAIL: art.factory.bialystok(at)gmail.com (replace (at) with @)

For more information please click here.
Posted by John Guzlowski at 4:04 AM 4 comments: 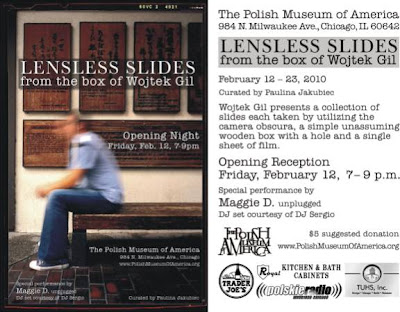 The poems of three Polish-American poets appear in the current issue of War, Literature, and the Arts, a national journal produced at the US Air Force Academy.

The poems talk about war, how it effects those who suffer through it and those who know it through the memories of others.

John Minczeski's "Auschwitz" from his sequence "The Camps"

Winter lasted forever
for those never heard from again,
their daily ration of coal as meager
as a bowl of thin soup.

But this October, in the suburbs of Kraków,
the air crisp as celery, the sky
sparks over maples that do not turn red;
horse-drawn carts creak on the side of the road

under loads of turnips and rutabagas
as they have for a thousand years.

A kiosk at the entrance displays books
in English and Polish, posters, a rack
of picture post cards. Get what you need here,
a fellow tourist visiting a second time says,

you won’t find another gift shop
anywhere on this tour. We get
two rolls of Kodachrome, a bottle of water.
Should I know what I’m doing here,

standing at the pit of history under Arbeit Macht Frei
as Joan frames it in the camera? Other tourists,
fresh from the orientation movie,
flood through. I am unable,

even now in the privileged future,
to go in without her.
Looking down cypress-lined boulevards
away from the barbed wire, the brick barracks

could be campus dorms. It is too easy to imagine
gerbera daisies by the front doors, rows of rustcolored
zinnias and dahlias gracing the road
to crematorium #1.

Trains pulled in hourly. Smokestacks
pumped around the clock with lubricated precision.
Prisoners, in striped pajamas worn to zero,
took their suitcases. Hush,

they said in Polish.
Take this hanger—you must remember its number.
Your clothes will be disinfected and returned
when you finish your shower.

prostheses
spent cans of Zyclon B
catalogued and examined
and under glass.

Told to label their suitcases,
they wrote in large, block letters

To read the rest of John Minczeski's poem "The Camps" (published in Letter to Serafin, University of Akron Press), please click here.

Lisa Siedlarz's poem about the fighting in Afghanistan

Dawn breaks with the stench of shit lagoon
where excrement is dumped. A dust devil
whips by portajohns, hot winds of diesel
and disinfectant. Our Terp calls it a Djinn
of free will that whispers give in to this evil.

The desert is littered: wrecked tanks,
trucks, silver hulls of Russian fighters.
Mosques and schools are rubble. Stucco
and mudbrick huts huddle between walls.
Our boots whoof up knee-high clouds.

Everything is dust in Ass-Crack-istan.
Children with fly-covered smiles spill
out chanting kalam. Pens we hand out
Are novelties in the villages.

The village elder greets us with a girl
whose mostly bald head is covered
in oozing sores. We give iodine, gauze.

The elder touches his heart, invites us in.
We peel off our armor and sit on the floor.

He presents Khosgovar, Iranian cola,
hocks spit into a spotted glass, wipes it on
his robe. Antifreeze jugs are ice buckets.
We raise our glasses. We want Americans
to stay, he says through our terp, if you leave,
we will have more war.

The old man takes my arm, How to show
my love? I take his hand in mine, place mine
on his shoulder, tell him thank you.

"Tea with Elders" originally appeared in her chapbook I Dream My Brother Plays Baseball, published by Clemson University Digital Pressn.

To read my blog about this book, please click here.

John Guzlowski's poem about the Nazi Blitzkrieg against Poland

War comes down like a hammer, heavy and hard
flattening the earth and killing the soft things:
horses and children, flowers and hope, love
and the smell of the farmers’earth, the coolness
of the creek, the look of trees as they uncurl
their leaves in late March and early April.

You smell the horses before you see them.

Horses groan, their heads nailed to the ground
their bodies rocking crazily, groaning
like men trying to lift their heads for one
last breath, to breathe, to force cold air
into their shredded, burning lungs.

For these horses and the men who rode them,
this world will never again be the world
God made; and still they dare to raise their heads,
to force the air into their shredded lungs.

Look at this horse. Its head torn from its body
by a shell. So much blood will teach you more
about the world than all the books in it.

This horse’s head will remake the world for you—
teach even God a lesson about the stones
that wait to rise in our hearts, cold and hard.

In the end Hitler sat in his cold bunker
and asked his soldiers about his own horses,
“Where are they?” He asked, “Where are my horses?”
And no one dared to tell him, “They are dead
in the fields with the Poles and their horses,
bloated with death and burning with our corpses.”

Several other WWII poems by John Guzlowski including "Bicycle in Wartime" and "Fear" appear in the online version of War Literature and the Arts. Please click here.
Posted by John Guzlowski at 1:10 PM 2 comments: