Woloch and Luczaj Read in Krakow

Cecilia Woloch and Sarah Luczaj have a reading coming up shortly in Krakow sponsored by the Massolit Bookstore and Cafe. If I were there, I would be going. If you click on the poster here, you'll be able to read all the details. 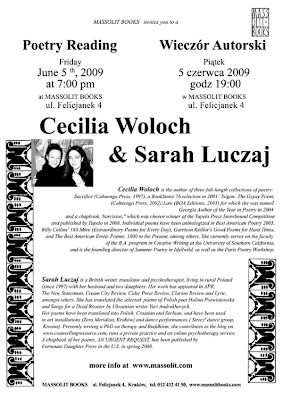 Here's a poem by Cecilia and one by Sarah.


IN WARSAW (from Tsigan: The Gypsy Poem)

In Warsaw, blackbird girls
swoop down in flocks
the old town square
a swirl of dark-eyed dark-haired girls
in brilliant skirts who circle
laughing at my waist
throw up their arms
to beg for sweets
who know among the tourists
whom to choose
(how do they know?)
so being chosen, being glad
in any language (tak
means yes)
I let them pick from sticky cakes
behind the glass, the old proprietress
glares back at me
and thinks, Amerykanka, idiotka
but cannot refuse
my cash (how far
in zlotys dollars go!)
so I buy cake for every girl
then watch them fly away again
their small hands sugared, glittering
as if I'd given
jewels to them
the sky above the bitter city
sharp as diamonds then


(NOTE: "Gypsies were incarcerated with Jews in the ghettoes of Bialystok, Krakow, Lodz, L'viv, Radom and Warsaw. … The total number of gypsies brought into [one] ghetto was eleven dead and 4,996 living. Of those, 2,686 were children."
-- Isabel Fonseca, Bury Me Standing: The Gypsies and Their Journey

José, the light is moving in the water
José I carved a poem in the walls of a room

the room was dust
and the planets were
trapped as the people
in it and it broke
on them, and the room
broke on the sky which
is made of dirt as
the room is made of
dirt and the people
are made of dirt
and also the stars

it broke
on your body made of stars
José and now the words
are set in those walls
forever, too deep, and no one
is allowed to stand
between them, my room
sits alone in the city
José the light is moving in the water
and you are a mouthful
a handful now, a scattering

I wanted to tell you this
José who broke the windows

José the room was dust


(Sarah Luczaj's poem is from her book An Urgent Request by Fortunate Daughter Press 2009, available at Teboth Bach.

There is a virtual interview with Sarah at Fortunate Daughter Press.

You can find more of her poems at Pedestal Magazine.)
Posted by John Guzlowski at 5:36 AM 1 comment:

I Dream My Brother Plays Baseball--a Chapbook by Lisa Siedlarz

The best poems, I feel, are those that are written out of the deepest emotions, the emotions that we can't shake off, can't explain, can't even fully share. Polish-American poet Lisa Siedlarz's poems about her brother and his tour of duty in Afghanistan grow out of such emotions. She's collected these poems in a chapbook titled I Dream My Brother Plays Baseball that's available as an online download from the Clemson University Digital Press. 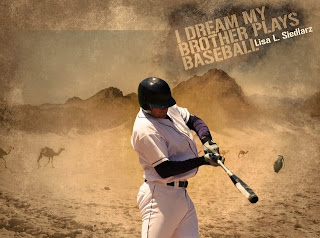 Recently, I asked Lisa how the book came to be written, and here's what she told me:

"I began writing the book when my youngest brother told me he was being deployed to Afghanistan. Of course I didn’t know at the time I was writing a book. That came later. I began writing cathartic poetry about the months leading up to his deployment. Then I turned it into a 7 part poem . . . . Then I wrote another poem about a dream I had (the title poem) . . . . Then all of a sudden I found I could only write war poems. That was what I lived and breathed."

Lisa's book, as you can imagine, is powerful. Here's one of the poems, the title poem:


I Dream My Brother Plays Baseball

On the field your platoon strategizes while Afghani
wind blows sand faster than Nolan Ryan’s fastball,
blurring vision like rosin in a pitcher’s eye. It sticks,
stings as bad as the last time I saw you at Ft Bragg,
a send-off for your twelve month mission.

From the stands I squint to see you as if I’d left my
glasses home. Bases and mound surrounded by dirt,
rocks, I turn and turn in this grey and translucent
gathering of blurred faces & monochromatic baseball
caps ~ Do you see my brother? Can you see him?

The crowd jumps up and roars as a soldier rips
a line drive through the gap, slides head first
into second just beneath the tag. A mailman
whose USPS eagle decorates his shoulders
like your army stripes, chases the play, throws

up his right arm to indicate safe. Under his left arm
he carries the package I sent to you a month ago,
labeled: If undeliverable, return to sender.
I take the box from him, hoping to hand-deliver
sunscreen, foot powder, Crystal Lite on the Go.

Lisa L. Siedlarz of New Haven, CT is an MFA candidate at WCSU. Awarded the 2006 John Holmes and the 2007 Leo Connellan poetry prizes, publications include: The MacGuffin, Calyx, Rattle, War, Literature & the Arts, Louisiana Literature, Main Street Rag, The Patterson Review, Big Bridge, Kritya, Caduceus and others. She is Editor of Connecticut River Review, the national poetry journal supported by the CT Poetry Society, and Managing Editor for Connecticut Review. Her work has been nominated for the 2009 Best New Poets Anthology.

If you want to read the entire collection, it's available online as a download at Clemson University Digital Press. It is also available for purchase as a hard-copy book at the same site.

Lisa's poems are also available in the April issue of Kritya devoted to Polish Diaspora poetry.
Posted by John Guzlowski at 9:36 AM 1 comment: 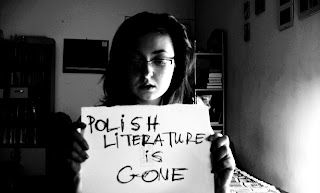 The second issue of Kritya devoted to the poetry of the Polish Diaspora is now available online.

The poets represented there are:

The April issue is still available online and it includes the following poets:

Both issues are guest edited by Christina Pacosz and John Guzlowski. Rati Saxena edits Kritya.
Posted by John Guzlowski at 8:01 AM 4 comments: