This coming Friday, January 2, five Polish-American writers will talk about their ethnic background and read from their writings. The session will begin at 330 and go until 530 at the Hilton Hotel, 1335 Avenue of the Americas. The event is sponsored by the Polish American Historical Association, and complete information regarding registering for the conference is available at the PAHA website.

The featured speakers are:

Stephen Lewandowski who was born in 1947 in Canandaigua, New York, where he still lives in a house built by his great grandfather. He has published eight books and chapbooks of poetry, most recently One Life (Wood Thrush Books, 2001). He has recently published a series of poems about his father available at The Scream Online. He is involved in environmental protection.

Joseph Lisowski grew up in Pittsburgh, PA, near the Heppenstal Steel Mill. He taught for 10 years in St. Thomas, VI., which serves as the setting for his three published mystery novels, Full Body Rub, Looking for Lisa, and Looking for Lauren. He has also published four poetry collections: Stashu Kapinski Gets Lucky , Fatherhood at Fifty, Stashu Kapinski Strikes Out, Near the Narcotic Sea. He currently teaches at Elizabeth City State University, in South Carolina.

John Surowiecki is the author of two poetry collections, Watching Cartoons before Attending a Funeral (White Pine Press, 2003) and The Hat City after Men Stopped Wearing Hats (The Word Works, 2006 Washington Prize), and five chapbooks. My Nose and Me: (A TragedyLite or TragiDelight in 33 Scenes) won the Verse Drama Award from the Poetry Foundation.

Bill Zavatsky was born in 1943 in Bridgeport, Connecticut. In the seventies and eighties, he directed the publication efforts of SUN, an independent literary press, bringing out thirty-five titles as well as several issues of SUN magazine and a two-shot specialty publication called Roy Rogers. He is the author of two books of poems, Where X Marks the Spot and Theories of Rain and Other Poems, two volumes of translation (Valery Larbaud and André Breton), and has published his work in many magazines and in anthologies, including The Face of Poetry, Up Late: American Poetry Since 1970, and The Jazz Poetry Anthology. His poems have served as liner notes for recordings by jazz pianists Bill Evans and Marc Copland. He himself has been a musician since childhood and specializes in jazz piano and the blues. 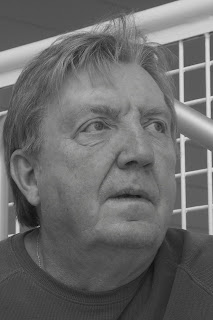 Polish-American poet Joseph Lisowski grew up in the shadow of the Heppenstal Steel Mill in Pittsburgh among Poles and Polish Americans who still remembered the work they did in the old country, in Katowice and Lublin and Gdansk. What they taught him was that a man's life was mostly spent in exile, and much of Lisowski's life has been spent away from them and Pittsburgh.

Since leaving Pittsburgh, he has almost always lived and written his poems and novels near the sea. First in St. Thomas, Virgin Islands, and most recently near the outer banks of North Carolina. There he is a professor at Elizabeth City State University.

His most recent book Letters to Wang Wei is a series of letters he has written to the 8th-century Chinese poet in response to his poems. Lisowski's poems talk of beauty and loss, friendship and family, and the hope and longing that all exiles feel.

Here's one of the poem from this collection:

The peonies you touched
I touched too.
Held them to my face,
blood red in the spring garden
of another life.

I searched as your words told me:
deep in the flower's heart
Autumn was about to break.
I wanted too much then.
In the red lust of passion,
I ached.

Forgive me for bruising your flowers,
for desire I cannot lose or break.

Kritya, an online Journal of Poetry published in India, is doing a special issue on contemporary Polish and Polish Diaspora poetry and is looking for poems and art by Poles or people of Polish descent. The poems should touch on some aspects of Polish or Polish Diaspora culture. The journal can be seen at www.kritya.in. The deadline is February 1, 2009, and the issue is scheduled to appear in May of 2009.

Send your contributions to the co-editors for this special issue: John Guzlowski or Christina Pacosz at jzguzlowski@gmail.com and pacosz@earthlink.net.
Posted by John Guzlowski at 7:11 AM 1 comment: