Time Between Trains by Anthony Bukoski

Anthony Bukoski's Time Between Trains: Stories, a collection of stories about working-class life in Superior, Wisconsin, was recently republished by Holy Cow Press.  The following is a review of this fine book by Pamela Miller of the Minneapolis Star Tribune. It would be interesting to hit the main drag in Superior, Wis., stop a bunch of people and ask them if they know who Anthony Bukoski is. Odds are, they don’t, unless they grew up with him in that gritty, blustery town or took an English class from him at UW-Superior.

Superior is not exactly a hotbed of literati, but it’s not exaggerating to say that Bukoski is its Faulkner, and that this singular port city’s lack of refinement is one of the things he loves most about it. His collections of interlinked stories, set in its working-class homes, businesses, bars and social halls, some in the present era, some in decades past, are arresting and poignant, unsentimental but unabashedly tender.

Duluth’s Holy Cow! Press has reprinted “Time Between Trains,” the fourth of his five books, first published in 2003 by Southern Methodist University Press. Let’s hope that means more people discover Bukoski, especially the people of Superior, whom he chronicles and honors.

The book’s 13 stories are populated by rough-hewn blue-collar Polish-Americans, once the city’s
powerhouse ethnic group, for whom the harsh (but beautiful) landscape, soul-testing winters, defining ethnicity, passionate Roman Catholicism, hard work, strong drinks, vigorous polkas and a complicated mix of wistfulness and stoic acceptance of fate are defining forces.

In the title story, a quiet, self-contained rail inspector, one of the few Jews left in a town that once had a flourishing Jewish community, crosses tracks with a widowed middle-aged teacher in a beautiful and wise contemplation on self-containment, solitude, connection and chance.

In “Holy Walker,” incontinent and increasingly forgetful widow Mrs. Stella Pilsudski suffers both embarrassment and absolution at a meeting of her sodality, where she is congratulated “on her suffering and devotion to prayer.” In “Winter Weeds,” a priest is humbled by desire for a pretty Polish war refugee and expresses his forbidden feelings in the tangled religious language of sin and contrition. In “The Bird That Sings in the Bamboo,” a young man just back from Vietnam dreams of, then slowly forgets, the girl he seduced with his tales of home as they lay on China Beach.

The setting is almost always Superior, which, one character quips, “is a classroom for the study of failure,” but the stories, with their themes of love, regret, aging, disappointment and yearning, could be set anywhere, because Bukoski is a wise enough traveler in the human psyche to know that Superior, like any place well understood, can become the world.

That wouldn’t work if he were any less of a writer. His is a distinct and memorable voice, rich in wisdom and wonderment, humor and melancholy, disillusionment and hope. The Duluth press’ reprint might be just what’s needed to bring his work to the people of his beloved, complicated city, who will find in it both mirror and window.

To read about Bukoski's most recent collection of short stories North of the Port click here.
Posted by John Guzlowski at 12:31 PM No comments: 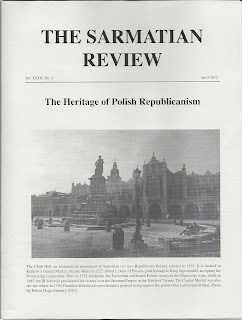 One of my favorite periodicals focusing on Polish and Polish Disapora issues is The Sarmatian Review edited by Professor Ewa Thompson of Rice University.  Each issue contains information about Poland, its culture and history, and its traditions.  There are other journals that promise the same thing, but Editor Thompson has a lively sense of what will be interesting to her readers and she never disappoints.

The current issue starts out with a data sheet: census info about the current Polish population (38.3 million) with stats about how many Poles have a post-secondary education 17.5 % and what the urban vs. rural breakdown looks like (59.6% vs. 40.6%).

This is followed by a fine article on the Polish heritage of Republicanism by the Polish scholar and poet Krysztof Koehler.  Prof. Koehler discusses the long history of republican democracy in Poland and how it has shaped Polish consciousness.

His piece leads to a series of reviews of books by excellent scholar/writers on the relationship of Scotland and Poland, the politics of Polish peasant parties, and the works of poets Bogdan Czaykowski, Andrzej Busza, and Tadeusz Rozewicz.

These last mentioned poetry reviews signal what I find most appealing about this journal.  Ewa Thompson has a decided inclination toward literature, and I find that the reviews she commissions are always first rate and stimulating.

The journal's interest in literature in the current issue is also signaled by an excerpt from a prose translation of Adam Mickiewicz's Pan Tadeusz by Christoper A. Zakrzewski and a poem by 19th Century Polish Poet Teofil Lenartowicz translated by Barbara Witak.

I've been a subscriber to The Sarmatian Review for many many years and always read it with the kind of interest I have when I'm reading the New Yorker.  It's that good

Current and back issues of the journal are available at its website.  You can get there by clicking here.