The following is Tomas Niedokos' review of London Manuscript by Anna Maria Mickiewicz. The review originally appeared in Nowy Czas:

This is a new volume of verse by Anna Maria Mickiewicz, a Polish-English poet writing in Polish and English and living and publishing in England. Based in London, she is a keen observer of the natural (parks and gardens) and cultural life of the Metropolis, aware of centuries of history behind her and the cultural landscape around her.
Her poems are epiphanies in which an instant observation, always rooted in a particular locality, may lead to other worlds: to Ancient Greece, Middle Ages or to thePolandof the poet’s youth. Socrates can be spotted in a quietLondongarden and “What if the woman on the beach was a cousin of Virginia Woolf’s?” The Dead are always with us in the communion of culture.
Being a Pole, and a distant relative of the great Polish romantic poet, Mickiewicz cannot leave behind the turbulent history of her country and Eastern Europe (transportations toSiberia, Marshal Law), which was also the history of her family and herself. The memories of “a crumbling world order”, generations “tainted by the pain of parting with the unsettled soil” add certain sadness and discord to the tone of this poetry, which seems to be in quiet and resigned harmony with its space and time.
Other poems, by contrast, are “impressionist” pieces (“Summer inSeaford”), evoking a passing moment, mood or sight, which allow the reader to see things from an unexpected perspective, to discover the unfamiliar in the familiar thanks to a well-crafted and perceptive metaphor. The poet has a special penchant for capturing watery phenomena: fogs, mists, puddles, “droplets of water”, so typical of English landscape and cityscape, but in the end they are always seen through the filter of culture; nature and culture coalesce.
A love of England, its nature and culture transpire from these poems, the poet seems to be very well rooted in her adopted country, but the outlook, metaphors, similes are her own and refreshing, drawing from the experience of living in two cultures, two histories and, last but not least, two languages. And for the reader it is an interesting and pleasing journey through this very sensual, but also marked by history and culture, poetic world.
Tomasz Niedokos
Tomasz Niedokos is a Lublin-based academic. He  works on English literature. His PhD was on "The Concept of English Culture in the Cultural Biographies of Peter Ackroyd”
___________________________________________________________

Arkhangelsk was just nearby.

This was not Siberia.
In Siberia
People were able to exchange clothes
For food.
In Arkhangelsk
It was not possible.

A frozen childhood picture
Is kept like in a crystal ball:
Muddy fields, a big forest
Someone is singing
Somewhere in Belarus.

I am only dreaming at night
I worry, if I will visit the place now


The dream will disappear

The sun sheds its golden drops.
The sea devours them instantly.
The sky shimmers.

The day is snatched from another story.
We’re arriving, here at the end of the line.
We convince ourselves that infinite space is an illusion…

We walk through the small English town.
A tiny station, plaster falling unevenly off the wooden beams.
Before us the Channel gleams threateningly.

In the distance a cliff plunges sharply into the sea.
No chips, no ice cream, no candy floss.
Dead jellyfish glitter on the pebbles.
The day passes lazily by
A ship silhouetted in grey against its face.

On the beach a couple unfold deckchairs
Wrinkled skin
They read the papers.
They seem unreal
Postimpressionist faces
All nonchalant

We’re heading back.
The cafes and restaurants are closed.
Who lives here at the end of the world?

Looking through photographs of the scandalous Bloomsbury set,
An old snapshot.
A gaunt young woman and a man in deckchairs.
They are reading the papers.

What if the woman on the beach was a cousin of Virginia Woolf's?
Who was the man?
A poet?
Or one of her scandalous friends?

Anna Maria Mickiewicz
London
Posted by John Guzlowski at 7:38 AM No comments:

With Blood and Scars by B. E. Andre

A note by Danusha Goska from Bieganski the Blog:

"With Blood and Scars" by BE Andre 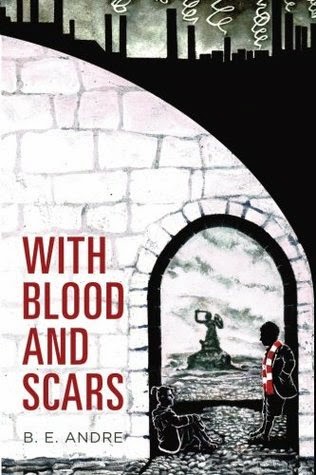 "With Blood and Scars" is a new Polish-themed book by B. E. Andre.

The book has two plotlines. One involves children, and is from the past. One involves a Polish father dying of cancer in modern day England, and his adult child hoping to learn the full facts of his life before he dies.

The book's intriguing title comes from a passage written for Polish children about their own country. How was Poland born? "With blood and scars."

Here's the book description from Amazon:

"Time is running out for Ania. She needs to ask her dying father a vital question; his answer is the key to how she will lead the rest of her life. She must force him to revisit his childhood in Poland in 1944, a time when decisions about survival were made on the spur of the moment, a place where chaos undermined all previous morality. Who is her father really? Can she bear to find out?

Another secret also torments her: an incident she filed in her memory store. Now the police have found the remains of a child in Whalley Range. Should she try to find the gang of friends from her own childhood days? Or should she keep the secret of what happened then? This coming-of-age novel is a tale of heroic survival against all odds: a life-affirming story of courage and hope set against harrowing circumstances. It celebrates the goodness that can be found in all nations."

The book is available from Amazon.
Posted by John Guzlowski at 5:19 AM No comments: