The Enemy by Elisabeth Murawski 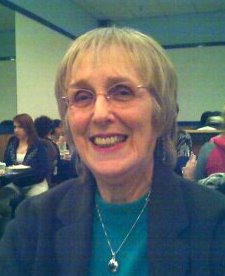 Elisabeth Murawski has allowed me to republish her poem "The Enemy" here at Writing the Polish Diaspora.  The poem originally appeared in The Hudson Review.

Ms. Murawski is the author of Zorba’s Daughter, which received the May Swenson Poetry Award, Moon and Mercury, and two chapbooks. Her poems have appeared in The Yale Review, FIELD, The Alaska Quarterly Review, The Hudson Review, et al. A native of Chicago, she currently resides in Alexandria, VA.

The title poem from Zorba's Daughter was reprinted here.  To read it, just click here.

Pogo warned, brave as an astronaut, the enemy’s
us. Promptly, we forgot the enemy.

Swayed by the Sousa band, Daddy lied about
his age, proudly fought the enemy.

The abused dissociate, fly high above
the pervert’s touch. Unsought, the enemy.

The little girl feared her body. An occasion
of sin, she was taught. The enemy.

Without David’s star, there’s no way of knowing
who’s the enemy, thought the enemy.

Survivors of wars often die in cars that swerve,
on narrow stairs. Like dry-rot, the enemy.

Booth took a bullet in the neck, no summer
patriot, having shot the enemy.

Happy they who carpet bomb and barrel bomb
to bring to nought the enemy.

They hung Matt Shepard on a barbed wire fence,
draped like an afterthought: the enemy.

The poet dived deeply into the swamp,
in terza rima wrought the enemy.

Train joyride: flying yellow rape fields;
wolves. The wolves are not the enemy.
Posted by John Guzlowski at 10:48 AM No comments: