I've been a member of Friends of Poland, an online discussion and information group for people interested in Poland and Polish things for about six years now, and I recommend it as a place where people can talk with others about everything from Polish cuisine to Polish history, from Polish film to Polish politics.

Interested in people, places and things Polish history, culture, politics, current events, religion, traditions, food and most anything else? Do you occasionally have a question about your Polish heritage but don't know whom to ask? Are there things about being of Polish background you sometimes would like to discuss with someone? If you have answered affirmatively to any of those questions, Friends of Poland might be worth looking into.

Friends of Poland (FoP for short) is a unique Internet discussion forum devoted to any and all topics relating to things Polish or Polonian. Not knowing Polish is no obstacle, because all discussion is in English. The forum was set up in the 1990s by Polish-born IT expert Marcin Å»mudzki, but most members are US-born Polonians. Other participants hail from Australia, Canada, Poland, Britain, Russia and other countries.

"I joined FoP in 1998, as I was looking for information to assist me in an upcoming trip to Poland," explained Laura Zurowski, a college official from Clintondale, NY, who is now one of the forum's moderators. "This year we have also started a FoP Facebook addressed to a younger audience with moreemphasis on arts and culture. Now that we have two avenues to participate(Facebook and YahooGroups) we have something to offer all those interested in the topic of Poland and Polonia."

Another FoP stalwart is John Radzilowski, a University of Alaska history professor. "I joined because it was and is one of the few places where Poles and Pol-Ams could discuss issues and exchange ideas in areas ranging from politics and religion to cultural matters and even Polish food," he told this reporter. "I've learned a lot from FoP. The great thing about it is that not everyone shares the same point of view. It's a bit like a community center, open to everyone even if some people spend way more time there than others."

FoP participants include Rik Suligowski Fox, one of Polonia's leading historical re-enactors, who regularly promotes the glory of Old Poland's military might on America's Renaissance Faire circuit. One FoP contributor from Michigan is now planning to move to Krakow in a few years, when he and his wife retire.

Another is James Conroyd Martin, the non-Polonian author of Poland-themed historical novels. The forum is an excellent place to announce Polish or Polonian events as well as Polish-related books, projects or services. But aside from people knowledgeable about and/or directly involved in Polish or Polonian affairs, like all such forums the FoP also has its share of lurkers. That is the term applied to participants who prefer to listen to and learn what others are saying rather than to actively contribute. There is no obligation to post messages, but after a time some lurkers decide to join in the discussion.

The only rules are that each post must pertain to some facet of things Polish or Polonian and be in English. If Polish terms or sayings are posted, and English translation must be included. And posters are required to sign each message with their name and location.

Another benefit of FoP is a daily news service dealing with Polish current affairs, compiled by another forum veteran, Professor Roman Solecki. Another of his achievements is his constantly expanding Prominent Poles website. It is a goldmine of information on Poles and Polonians who have made various contributions to the world.

If you feel such a source of information and the lively discussion it often generates may be your cup of tea, contact listowner Marcin Zmudzki for more information and details on how to join: marcin(at)zmudzki.net--substitute @ for (at).
Posted by John Guzlowski at 3:41 AM 4 comments:

The following article about Ostatni Etap, one of the first films about Auschwitz, was written by John Bertram and first appeared at his blog Venus Febriculosa:

I first learned about the existence of this relatively obscure (in the United States, anyway) film while perusing a gallery of vintage Polish film posters. My eye was immediately caught by one similar to the original cover for We Were in Auschwitz designed by Anatol Girs. Its designer, Tadeusz Trepkowski (1914-1954), a largely self-taught artist from Warsaw, was one of the original graphic designers commissioned after World War II by Film Polski and Central Wynajmu Filmow (state-run film producers and distributors) to design film posters. The film Ostatni Etap was a semi-autobiographical story about prison life in the women’s barracks at Auschwitz.

A member of the Polish resistance during the war, director and co-writer Wanda Jakubowska (1907-1998) was arrested in 1942 and spent six months in Warsaw’s Pawiak prison before being sent to Auschwitz-Birkenau where, she says, “the decision to make a film…originated when I crossed the camp’s gate.” A member of the camp resistance, she was moved to the Rajsko, an experimental agricultural station and one of more than 40 sub-camps, and in early 1945 was transferred to Ravensbruck where she was liberated by the Soviet Army. Once free, Jakubowska immediately began work on the script with another survivor Gerda Schneider, a German Communist, based exclusively on events witnessed by them and their fellow prisoners. By the end of the year they had produced a first draft and, returning to Auschwitz in the spring of 1946 where she had decided to film, she was shocked to find “daisies of monstrous proportions and exuberant, indescribable vegetation on the soil that was fertilized by blood and sweat.”

Filming at Auschwitz-Birkenau began in the spring of the following year. Actors, many of whom were originally interned at Auschwitz, lived in the former barracks and instead of costumes wore authentic striped prison uniforms. One actor noted that “the air was filled with a characteristic unpleasant smell that had a depressing effect on us.” As harrowing as the movie is, Jakubowska notes that “the camp’s reality was human skeletons, piles of dead bodies, lice, rats, and various disgusting diseases. On the screen this reality would certainly cause dread and repulsion. It was necessary to eliminate those elements which, although authentic and typical, were unbearable for the post-war viewer.” 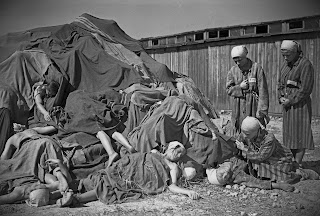 Released in Poland in March 1948 barely three years after Auschwitz was liberated, Ostatni etap was the second film produced by Film Polski and the first Polish film to get international distribution. Writing in The New York Times upon the occasion of the film’s U.S. release in March 1949, Bosley Crowther points out:

“ …the story itself is secondary…to the staggering accumulation of daily atrocities, seen in the pattern of the story through a pitilessly factual camera’s eye. From the opening shot in the death camp, showing the brutality of a guard to a pregnant girl, standing among a group of women in a dreary sea of mud, the film is a continuation of horrifying episodes which make up a modest realization of the inhumanity of the Nazi camps.

There is the episode, for instance, of the murder of the baby born to the suffering girl. There is the arrival of a trainload of Jewish prisoners who are brutally separated, some to be gassed. There are terrifying scenes of the inmates being driven and beaten in the prison yard while a band plays serenely cheerful music under the baton of an agonized girl. And there is one simply overwhelming sequence of little children being marched off to be killed, with a cut of their discarded toys piled up among the relics of all the dead. There are also recognitions of the frailties of the inmates themselves, revealed in vicious and deceitful stratagems and deeds.”

Interestingly, Wanda Jakubowska’s creative arc parallels that of Tadeusz Borowski’s: imprisoned at Pawiak, then Auschwitz, shortly thereafter producing an authentic, unflinching landmark work based upon harrowing experiences. However, whereas Borowski’s stories remain completely free of any trace of ideology, in Ostatni etap, Jakubowska’s Communist leanings are clear to the point that to some the propagandist nature of the film (at one point, for instance, Stalin’s name is reverently invoked) leave it irrevocably compromised. Still, it remains a valuable document for its powerful imagery that has served as template for numerous subsequent films on Auschwitz.

To read more about women and what happens to them in war, please click to my post Women in War.
Posted by John Guzlowski at 8:15 AM 1 comment: