George Gömöri's history shows in his poetry. He was born in Hungary in 1934, fled to England because of his involvement in the Hungarian revolution of 1956, and came to rest in England where he taught Polish and Hungarian at the University of Cambridge. Recently, her Excellency Tuge-Erecinska, Ambassador of Poland in London, presented him with a "diploma," a document of his membership in the Krakow-based PAU (Polska Akademia Umiejetnosci). He is the only Hungarian member of this academy which counts among its members Umberto Eco and Andrzej Wajda.

George Gömöri's poems -- like his essays -- are smart, engaged, and impassioned--a combination hard to turn away from. 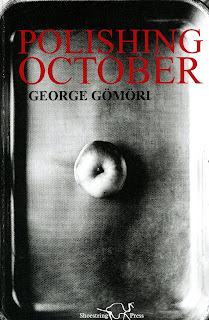 Polishing October is his thirteenth book of poems, his second in English, and the poet George Szirtes says this about it:

"George Gömöri's lyric poetry is a mix of passion and irony, the irony itself always informed by passion. His political poems learn their lessons from a history where the small get their heads kicked in by the great who use them for footballs. There is a certain wry comedy involved in the process but the stakes are high: defeat and exile are for real, as is the pain."

Many of George Gömöri's poems contain Polish subjects and echoes, but one that I find especially moving is his poem about the Polish poet and artist Cyprian Norwid who came to New York in the 1850s. Like many Poles of the Polish Diaspora, Norwid felt his exile deeply and complexly:


A letter of Cyprian Norwid’s from New York

If it chanced that, defying many a storm,
our sailing-ship crossed the ocean and
I reached dry land again after sixty days,
and if, later, the big splinter that wounded my thumb
failed to cripple me, so I could draw again –
if God had preserved me in these ways, perhaps he has
some other plan for me. In the Crimea, say,
I’d be happy to take up arms against the helots
serving the Frost Colossus, or to aid our cause elsewhere.
Please help me, You or some other wealthy Pole,
to get back soon to that Old World of ours.
There are all kinds of things in the papers here
and you can’t really tell what the truth is.
Kossuth, of course, was splendidly received,
but you’ve got to be defeated and a famous exile
to qualify for such treatment. As for me,
I work as an artist here, but unknown and lonely –
my windows look out on to a cemetery –
above the bushes humming-birds flutter and sometimes
a heavy scent of flowers comes wafting by . . .
In my thoughts, though, I’m wandering in Paris
or better still in Rome, where the past’s alive
and consoles – where you live not just for the present,
not only for the Market.

Polishing October is available from Shoestring Press in the UK and Amazon books in the US.
Posted by John Guzlowski at 12:30 PM 2 comments:

Mirosława Maria Kruszewska's W pułapce wolności/Trapped in Freedom is a bi-lingual book of poems that tells the story of her generation. Born in Gdansk, Poland, in 1950 and now living and working as a journalist in Seattle, she grew up in Communist Poland, lived to see the rise of Solidarity in the early 80s, and went into exile with her family in 1981. 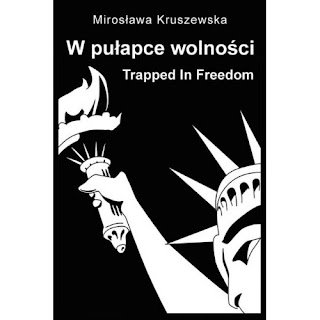 In her poems we return to the world of the Cold War. We read about Poland's long queues and hunger, the dehumanizing refugee camps in Austria, and finally an America that offers a frightening freedom that at times overwhelms the immigrant, the person who has no home in this world.

Here's a poem that for me captures that sense of estrangement:

give it a rest with your consolation
I don't cry for the dead now anyway
I was blown out into the world so far
that I no longer know
who here is alive or dead.

You can read more about Ms. Kruszewska and other Polish language poets living in the US at the Polish American Poetry website: http://www.polishamericanpoetry.com/
Posted by John Guzlowski at 8:57 AM No comments: 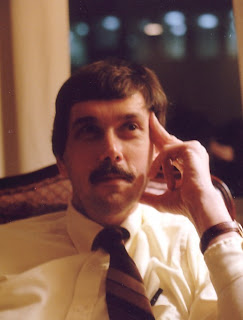 I've been reading David Radavich's poems for probably about twenty-five years now, and there's something in his voice that has me hoping for another twenty-five years. There's a meditative quietness and seriousness to his voice that draws me deeper and deeper into his poems and makes me want to know what he and his poems have to tell me about love and time, death and joy.

You hear this voice clearly in Canonicals: Love's Hours, his new chapbook, from Finishing Line Press (available also at Amazon). 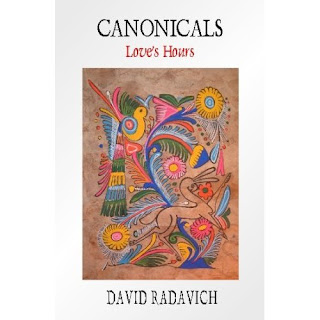 Here's one of the poems from Canonicals.


Words crawl
into bed with me

and speak of you
even though
you are not here

and the morning
shines alone

one is grateful
for gods who appear
when summoned

wordless
as the bedsheet

a world raucous
in bomb-blasts, rapings,
another bankruptcy for greed

words creep in
through the window

thinking of sun
shining equally in your face

David is also the author of Slain Species (Court Poetry Press, London, 1980), By the Way: Poems over the Years (Buttonwood Press, 1998), and Greatest Hits (Pudding House, 2000). He has also published a full-length comedy, Nevertheless . . . (Aran Press, 1989), five short dramas, and a wide range of poetry in journals and anthologies. His plays have been performed across the U.S., including five Off-Off-Broadway productions. Fragments of the Third Planet received its European premiere in 2000 in Pforzheim, Germany as part of their Millennium Festival. America Bound: An Epic for Our Time (Plain View Press, 2007) narrates American history from World War II to the present.

You can read more about him at his website.
Posted by John Guzlowski at 11:08 AM No comments: