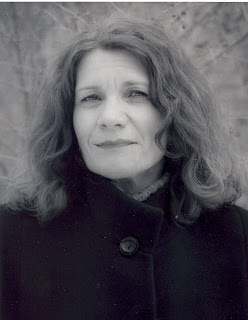 When I read and reviewed Linda Nemec Foster's Amber Necklace from Gdansk several years ago for the Sarmatian Review, I knew that I was reading an essential Polish-American poet.

This sense has only increased as I've read more and more of her poetry over the years.

Here's one of the poems from the book:

TWO VLADIMIRS AT THE WINDOW

Here's what Faye Kicknosway, one of the book's early readers, said about it:

These poems evoke--in their concision and clarity--intense, disturbing images of lives shredded into pieces so small all that’s left is the memory of having endured. They are caged inside the empty space of the page, which seems to want to suffocate their spare, fragile, incredible beauty. Each image speaks a world that is window and mirror of what we hide from in the fabricated assemblages we make against the truth these poems speak.
-

The book is available from The Lost Book Shelf.
Posted by John Guzlowski at 11:50 AM No comments:

CHRISTINA PACOSZ: LETTERS TO THE WORLD

Polish-American poet Christina Pacosz has recently been featured in the Red Hen anthology Letters to the World: Poems from the Wom-Po Listserv.

Here's one of Christina's poems from the anthology, followed by a part of what reviewer Laurel Johnson said of her contribution to this collection of poems:

My thoughts stray to her, to him
Each of those four gone
The family pentacle broken now
Leaving me alone
On the lone prairie
Too exhausted to howl at the moon

Several years ago I reviewed the collected poetry of Christina Pacosz. Her beautiful words stunned me to silence and I've been following her published poetry online ever since. Like many female poets from around the world, Pacosz is a member of the Wom-Po Listserv -- an internet presence founded by Annie Finch and recognized internationally for its excellence. Wom-Po's goal as a website and the purpose of this anthology is to "give women poets and their poetry the recognition they deserve." To date, Wom-Po spin offs include listservs, workshops, collaborations, translations, and networking opportunities unavailable to female poets of earlier generations.

This is an exceptional anthology, one to be savored slowly by poetry lovers everywhere. With a universal wisdom, tenderness and grace, these poets transcend the violence we see every day in the world around us. They are the Emily Dickinsons of their time, sending their messages to the world. To quote the Dickinson poem:

This is my letter to the world,
That never wrote to me…..

In this age of wars and cultural divisions, it's time the world listens and writes back in kind. That's what the Wom-Po listserv poets hope to accomplish with this anthology. Highly recommended.

This anthology is available from Red Hen Press and from Amazon.
Posted by John Guzlowski at 10:24 AM No comments:

Stephen Lewandowski and Helen Ruggieri Write about Their Fathers

Over the years, poets Stephen Lewandowski and Helen Ruggieri have collaborated on a series of poems and short essays about their fathers that says something essential about the way all of our fathers have touched us and keep touching us.

This writing now appears at The Scream on Line, an online journal of the arts, culture, and literature. If you scroll down The Scream's contents page the collaboration appears under the heading Poetry.

Here's one of the short essays from Steve and Helen's collection:

I was thirteen when my mother and I drove to Buffalo to visit my father in the hospital. He’d been there several months but he was too sick to see us, the doctors said. Now, they said, he’d improved enough so that our visit might be a good thing for him.

Before we arrived, I knew from talk in the family that they’d tried shock therapy on him. Nothing else had worked for long, so they hoped that shock might be an improvement. I thought of the Frankenstein monster shocked into life, but this was different, wasn’t it?

When the orderlies brought him into the visiting room, at first I couldn’t even be sure that it was him, he was so thin and pale. He wasn’t wearing his clothes-- he was dressed in scrubs the same as the orderlies. His eyes had always been blue, but now they were different, light and shallow, vacant.

At first there was no recognition in his face. He looked drawn and tired, but then the blue of his eyes seemed to deepen and spread, and he saw my mother and me, sitting and waiting for him. His gaze became intelligent. He understood who we were and took us in. The doctor had been talking about his improvement, and my mother and I had gone on about news at home, but finally he said, “Thanks for coming to visit me.” He didn’t have much to say about where he had been, but in a few words he returned to us.

On the trip home, that change in his eyes is what I remembered and turned over in my mind. Who was that person who, at first, didn’t remember us? Who recovered and slowly returned to the man we knew so well?

Posted by John Guzlowski at 10:46 AM No comments: