Two Review: A Journal of International Poetry and Nonfiction 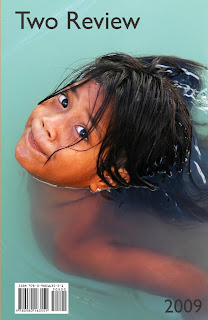 Polish-American poet and editor Jeremy Edward Shiok recently sent me a copy of Two Review, the journal he and Brendan Noonan edit.

The journal is beautiful, outside and in.

The cover illustration, the printing inside, the formatting--all reveal the editors' skill, but what's most exception, of course, is the poetry Shiok and Noonan have been able to gather together.

Some of the poets -- like Linda Nemec Foster, Marvin Bell, and Marge Piercy, I've known and admired for years, but others are new to me. I especially enjoyed Paolo Ruffili, Jeff Knorr, and G. Nakhutsrishvili.

I wrote to Jeremy Shiok and asked him about his journal and what inspired him to create it. Here's what he wrote me:

Why do we do the journal? Speaking for both Brendan and myself: It started as a way of staying connected after the rigors of graduate workshops wore off and work, families, and kids took over. It has continued as a method for keeping the life of poetry in our lives, and the poetry of life in our poetry.

For me, I am able to connect with people all over the world through the journal as a medium. It gives me a platform to begin, renew, and carry on artistic, social, geo-political, etc. conversations with like-minded folks.

Linda's work I first read in 2003 while at AWP and have admired it since, but through the journal experience we've been able to connect. Gaga Nakhutsrishvili's work came to me through an editor in Tbilisi I was corresponding with during the recent Russo-Georgian war. I wanted to connect with people on the ground; wanted to hear about their experiences as they were happening. And amidst the destruction taking place we were able to discuss and then exchange poetry. How amazing is that? I discovered an incredibly vibrant artistic and literary culture in Tbilisi, not one from history, but one that is thriving today.

In reality, each contributor to the journal becomes a connection, a part of our community, not just someone with a poem in the Table of Contents. I could tell the story of how each contributor came to be on TR's pages, and each one involves much more than just submissions and acceptances.

Despite my day job, the editing and writing exchanges are truly "the thing." It's what Brendan and I both thrive on outside our own writing. But we also work and have a deep respect for working peoples, so we're drawn to narrative writing that invites us into that experience somehow. The journal reflects this.

Jeremy Edward Shiok also gave me permission to include one of the poems by Polish-American Linda Nemec Foster that he recently published:

The tourist has no idea
what is fashionable here.
Her confused circadian clock
can't even determine day
from night, so forgive her
for wanting only two colors
on her lips. One to echo
the honey glow of sun,
the other to resonate
the blue aura of moon.

But how could she know
Stalin would (in effect)
abolish all color --
no tangerine blush /
tropical melon / scarlet freeze --
no rouge violet / raspberry glace /
mauve cooler. Only lipstick
by numbers. The digits randomly
assigned in some outdated
cosmetics factory on the outskirts
of town. Peach melba becomes 855.
Rose creme becomes 412 (matte) or
411 (semi-gloss). The numbers
slowly marching to infinity
on the shelf of the empty store.
As if this calibrated palette
could be authentic. Not Michelangelo
illuminating the creation
of Man, but a faceless socialist
painting Sobieski's palace frescoes
by number. Not David in Florence,
but the granite breasts of the massive
Soviet woman sculpted into a bureaucrat's
gray office building on Konstytucji Plac.

The bureaucrat whose days
are filled with dreams
of whores in hot pink
G-strings. Whose nights
are filled with staring
at the crowded and desolate
streets. Across the square,
the tourist paints her lips
too red. The color
overwhelming the face
that looks back at her
from the borrowed mirror.

Two Review is currently accepting submissions for the 2010 issue.
Posted by John Guzlowski at 8:08 AM No comments:

The Orpheus Complex by Leonard Kress 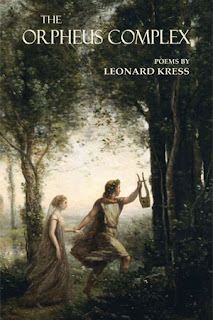 It's an ambitious sonnet sequence that combines the myth of Orpheus with the poet’s reflections on various other issues including the state of spirituality in America today, the problem of "translating" an ancient myth into a contemporary context, and the nature of poetry and its relationship to what poets are writing. Poetry at the start of the twenty-first century has become familiar, comfortable, safe. 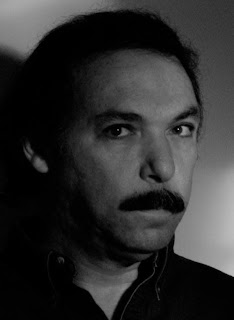 Leonard Kress, the author of The Orpheus Complex seems to declare, "I’ve had enough of that." He asks us instead to imagine Orpheus, the ancient poet, sprung loose in America and writing intricate, rhymed sonnets that look at the world as it is and as it has been imagined by the poets who have come after him. The wonder of this book is that these poems don’t seem academic, simply a Modernist or Postmodernist exercise in literary self-consciousness. Rather, what stands out in “The Orpheus Complex” are the author’s erudition and considerable craft combined with his own deeply-felt life concerns.

The mix results in poems that are always surprising, knowing, and effecting.

This is a book of poems to open again and again.

Here are two of the sonnets from The Orpheus Complex:

ORPHEUS ON AND OFF THE ROAD

A blinding locust storm in southern Illinois.
the kids who pick me up stole this Ford,
drinking and joyriding, reveling toward
the coast. And when they stop to let me pry
the black gook off the wipers, they screech away,
hysterical, my rucksack in their trunk.
I have surrendered to the road and pray
as I hitch, buffeted by each passing truck,

it will provide. And so it does. Two more rides,
Iowa cornfield to sleep, dancing stalks
and whispers--to be found you must be lost.
Falling stars throughout the night, roads
almost abandoned--a Mustang of six-packs
and four small-town girls, heading nowhere fast.

In this hidden grotto, no bird or bell
awakens you, no light can penetrate,
and memory-numbing waters always spill
from some deeper dungeon just to create
sweeter dreams. Let the black wings of night
rush over, longing to get in. Here, where,
poppies glow and silent blackbirds prepare
to nest-- Orpheus has come to meet

the one he’s watched night after night in dream.
The pleasure is greater the shorter it lasts,
or so he thinks. She grows more beautiful
with each pass, and he tries to touch her breasts.
Doesn’t he know she isn’t what she seems?
Doesn’t he know the multiple meanings of fall?

Leonard Kress blogs about poetry and other things at Myshkin 2.
Posted by John Guzlowski at 10:47 AM No comments: