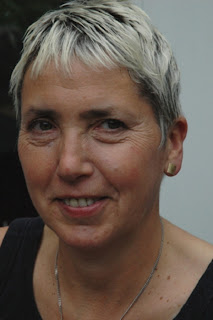 In these two books -- Everyday Angels and I'll Be Back Before You Know it -- there are poems for anyone who has ever lived in two countries, two languages, two hearts at once.

Maria Jastrzębska was born in Warsaw in 1953 and came to England as a young child when her parents escaped from Poland. She writes poems that are at the same time here in the new world (England or America, call it what you will) and there in the old world (Poland). Her poems explore the borderland between lives and countries that all exiles, refugees, and immigrants live in, the shadow land of objects, places, and people that sometimes as sure as stone and other times elusive as dreams.

What her poems do in these two books is to make this shadow land, this border between here and there, real to the reader in the way that only poetry can be. She slows down the swirling calls of time and memory and allows us to rest for a moment in that changeless place she has created, regarding the ashes in our hands, the ones that refuse to be ashes.

These are deeply personal poems that speak directly and clearly to the reader. I saw this immediately in "Europa," the first poem in the wonderfully titled I'll Be Back Before You Know It. 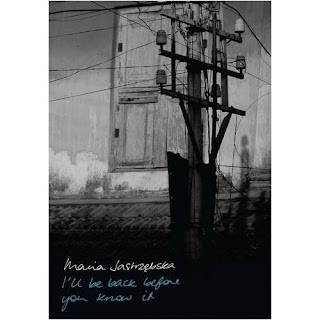 There was a smell before I was born.
It came across fields
dotted with sows, above yards

where thin chickens scratched
in the dust, past cordons
of pines, scaring out quails.

It was stronger than the smog
of Nowa Huta, which eats away
stone faces and newborn lungs.

or blew over rivers and broken
telegraph wires to spread
above schools and church spires?

Ladies dabbed Chanel Number 5
on their fox furs to ward it off -
gents lit the fattest cigars.

but overnight they vanished.
Not even alcohol or opium
could dispel it - the smell

stayed in the air.
Soon everyone coughed.
Some politely, some not. 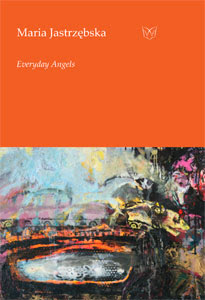 In Ms. Jastrzębska's more recent book Everyday Angels, she continues to explore this borderland and her exploration, I think, becomes a search for what lasts in this life and the one we left behind. I see this in many of the poems, but perhaps most clearly in the poem that ends this volume.

No one
expected them

to live this long.
Their bodies sharp

mottled by every
disease known.

in spite of them,
rotting before.

misshaped by
the lips,

darkening too soon.
One or two

Everyday Angels is available from the publisher at Waterloopress.co.uk, I'll Be Back Before You Know It from Pighog Press.

Contact information for Ms. Jastrzębska can be found at her webpage.

Poems by Ms. Jastrzębska appeared in the issue of KRITYA devoted to Polish Diaspora writers, edited by Christina Pacosz and me.

To read more about Maria Jastrzębska, please go to the Poetry International website.
Posted by John Guzlowski at 10:42 AM 1 comment:

Email ThisBlogThis!Share to TwitterShare to FacebookShare to Pinterest
Labels: Everyday Angels, I'll Be Back Before you Know it, Maria Jastrzebska 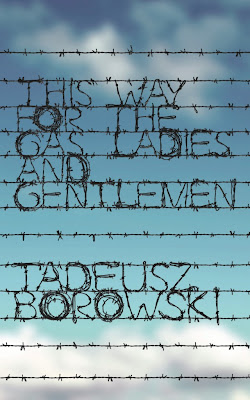 I was fortunate enough to be asked to serve as one of the judges in the recent competition to find a cover design for Tadeusz Borowski's seminal book about his experiences at Auschwitz, This Way for the Gas, Ladies and Gentleman. We received hundreds of fine designs from around the world, and the image above by Anna Zyśko of Tarnobrzeg, Poland, was finally--after much discussion--chosen as the winning design.

To read more about this competition and to see five other entries to the contest, please go to John Bertram's site Venus Febriculosa.

The competition was sponsored in part by the Consulate General of the Republic of Poland in Los Angeles.
Posted by John Guzlowski at 10:20 AM 1 comment:

For many readers, Poland is the country of poets. Some of them are internationally known. The recent Polish Nobel Laureates, Czesław Miłosz and Wisława Szymborska, of course, come to mind. But the list of fine contemporary Polish poets is deep, and some of their names are familiar to American readers, names like Zbigniew Herbert, Tadeusz Różewicz, and Adam Zagajewski; others aren't yet.

But they will be.

A new generation of translators are working to make the best contemporary Polish poetry available to American readers. I've written about some of these translators here in the past, scholars and poets like Karen Kovacik, Leonard Kress, Oriana Ivy, Piotr Florczyk, Janusz Zalewski, Danuta Borchardt, Bill Johnston, and Ewa Hryniewicz-Yarbrough.

Robin Davidson and Ewa Elzbieta Nowakowska have joined this list with their powerful and long-overdue translation of the poems of Ewa Lipska. Entitled The New Century: Poems, this volume from Northwestern University Press gathers together many of her finest poems with introductory material by the two translators as well as Ewa Lipska.

"To situate Lipska's verse within twentieth-century Polish lyric poetry, it is important to see the work as arising from Poland's distinct encounters with European totalitarianism. The poems are shaped by the legacy of wars, both by Polish cultural memory of the German occupation and the horror of Holocaust atrocities and by the presence of Soviet communism, in particular the two decades of the 1970s and 1980s, during which Lipska matured as a poet. The intersection of history, politics, and the literary arts has typified East European culture for more than two hundred years.... The role of the Polish poet became one of an 'acknowledged legislator,' to reverse Shelley's depiction of British romantic poetry. In Polish lyric poetry, neither does the speaker stand outside time nor does the poem consist of epiphanic moments where time stops and human experience expands. Rather, the Polish lyric becomes the site of intersection between social forces and the individual, primarily because the genre has repeatedly served national political agendas."

Some of the finest poems by Lipska focus most keenly on this intersection.

Here are a few:

From the charred eye
ran a tear.

Perhaps he will come to you
o, wretched humanity,
as you cross over
to the other sin.

The new century has come as no surprise.
After midnight we already call it by name.

Your dress lies beside the bed.
My suit a pirate flag.

Reports warn us
about the slippery surface of history.

The question of what comes next
we send back to the gala.

We speak to each other in fireworks.
A drowsy noun in the mouth.

We subject breakfast to laboratory tests.
314 calories on a white plate.

Forever and ever Enter
(in the news )

The most state-of-the-art crematorium in Europe.
Berlin Treptow. An Arcadia of mourning.

The holy order of computers with eyes of lusterless crepe.
A web of silence. Only the rustle of artificial leaves.

The afterlife of Pentium.
Immortal memory.

The concurrence of two days in one.

For the deceased a hairdresser. Beauty treatments.
A photographer’s studio. Warm blackness.

Antivirus software on guard at each floor.
(Torrential content outside the window.)

A casket on a hard disk.
We lie there in the index of names.

A droplet in the corner of the mouth.
Moisture of dead love.
We were in love when this happened.

Now there’s only a file connected to the sky.
A closed database.
An orphaned cloud from the chimney.

Are you sure you want
to begin deleting?

They fight a losing battle of dates.
Blurred. Against a background of surly clouds.

In the Hollywood movie theater
a train of abandoned seats whistles.

The remains of films
still breathe through the screen’s lips.

“But Venice for me is so much like
the graveyard of happiness that I haven’t
the strength to return”—wrote Marcel Proust.

The corrupt bed linens of Shakespeare
in the national theater.

A city of muscular stadiums
clings to us.

A pirated copy of prosperity.

The penitence of a wilted rose
tells us nothing yet.

Arrhythmia of infinity.
Gigabytes of memory.

At dawn
a bigoted breeze shivers.

All around
the broken glass of frost.

You are yet to be.

On a balcony a woman
a cloud resembling a kiss.

We are connected
by a dye works of sunrises and sunsets.
A polishing shop of magic, words, and fire.

They divide us forever.

The New Century: Poems was reviewed in the Times Literary Supplement by Piotr Gwiazda.
Posted by John Guzlowski at 7:19 AM 2 comments: