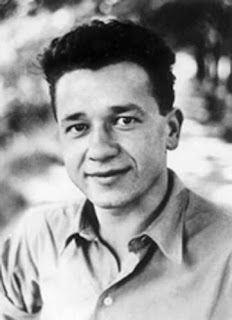 John Bertram sent me a note yesterday about a design competition that his company, Venus febriculosa, is conducting.

They are looking for a cover design for Tadeusz Borowski's classic memoir of his life in Auschwitz and Dachau, This Way for the Gas, Ladies and Gentlemen.

This is a no-fee competition with a $500 prize.

Entrants are encouraged to visit the Wikipedia entry for Tadeusz Borowski and, of course, to read the book. Excerpts from This Way for the Gas can be found by clicking here.

You can find all the details of the competition at Venus Febriculosa's website and at the PDF file for the rules.

Recently, I published a poem based on an incident Tadeusz Borowski describes in his memoirs. The poem is called "Fear."

During the war, there was only work and death.
The work broke you down, filled your stomach
with rocks and threw you in the river to drown.
The work shoved a bayonet up your ass
and twisted the blade till you were dead.

In the camps, there was only what we ate
and those we worked with—sometimes women.
But we never made love. I’ll tell you why.
Fear. I remember once a thousand men
were working a field with sticks, and trucks came
and dumped naked women in front of us.
Guards were whipping them to the ovens,
and the women screamed and cried to us, pleaded
with their arms stretched out—naked mothers,
daughters, and sisters, but not one man moved.

Not one. Fear will blind you, and tie you up
like nothing else. It’ll whisper, “Just stand still,
soon it will be over. Don’t worry, there’s nothing
you can do.” You will take this fear to the grave
with you. I can promise. And after the war,
it was the same. I saw things that were as bad
as what happened in the camps. I wish
I had had a gun there. I would have
pressed it here to my forehead, right here.
Better that than what I feel now. This fear.