Douglas Blazek at Moe's in Berkeley

Janusz Zalewski writes to me about his visit at Moe’s Bookstore, in Berkeley, where he attended a reading by Polish-American poet Douglas Blazek on January 12th: 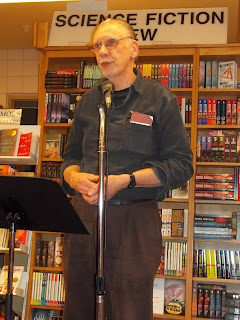 Douglas Blazek’s public appearances are very rare, so I rushed to Berkeley as soon as I learned he was going to read at Moe’s.  Blazek’s Polish-American background is not that widely known, so let me quote what he said about his upbringing; this is from the second issue of Poetry Now (1974), a magazine published in California.

“I was born in St. Elizabeth’s Hospital, Chicago’s west side, on the last day of 1941.  For a while we lived with my seamstress grandmother and my alcoholic grandfather on George Street, then moved to a third floor cockroach-settled walk-up at the corner of Central Park Boulevard and Milwaukee Avenue behind the Wonderland Ballroom where every night polkas would drift in like colored smoke over my livingroom cot. […]  On Labor Day 1950, our family left the Polish ‘ghetto’ for the green country town of Wood Dale…”

A few years later, in The Quarterly Review of Polish Heritage, Blazek is quoted saying this about his Polish roots: “… European ethic marked my life as if I had swallowed a handful of tattoo noodles. Polish custom, Polish language were too far removed to have any immediate influence; but that creed of labor and the necessity to immerse oneself in the apple-urine bath of reality will never leave.  A stoicism and grace in facing adversity, a determination to see things to their end, an acceptance of pain and discomfort, a humble disposition to life; these are the trademarks I associate with my Polish relatives and the community in which I was raised.”

In 1980 Blazek was featured, among a few dozen others, in Victor Contoski’s Blood of Their Blood – an anthology of Polish American poetry.

Blazek has been best known not only from his poetry, which includes All Gods Must Learn to Kill, 1968, with illustrations by Robert Crumb, and Skull Juices (1970, Introduction by Charles Bukowski), but also from publishing others. He published the first two prose chapbooks of Bukowski, Confessions of a Man Insane Enough to Live with Beasts (1965), for which he was investigated by the FBI, and All the Assholes in the World and Mine (1966). Blazek was a very prolific writer until about the end of seventies, when his writings became much more sparse, with complete silence in the early nineties, and gradual come-back around mid-nineties.  This is according to James Denboer’s A Bibliography of the Published work of Douglas Blazek: 1961-2001 Glass Eye Books, 2003.

Blazek has been always very intimate with poetry.  Here is what he said in the August 16, 1973, issue of the Rolling Stone magazine: “Poetry has not only been separate and aloof from life, afraid to get its hand soiled by it, but it has also been inferior to life, more passive and less inspiring… Poetry is a force that can enlighten men internally, so that what they learn from it can be applied to their external lives.  If it doesn’t do this, it is just another toy.”

Since then, Blazek’s views on poetry evolved significantly.  In his own words, “he has undergone a transformation.”  His poetry has become less externalized and while some of it is still narrative, most evolved into “a language based in consciousness.”  The first poem read at Moe’s, coming from one of his two new books, appears below.  Those books, Gutting Cats in Search of Fiddles and Aperture Mirror, have been published in 2012 by Blazek’s new publisher, Edition Muta, and are available from:  http://editionmuta.com/ 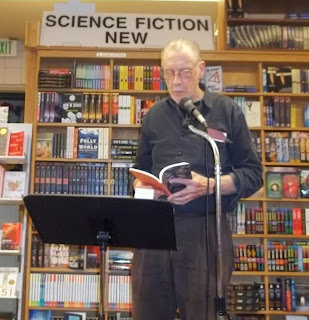 What do we see in the greening
beyond this language?
Why are we compelled to travel
each of us one by one
stepping over
those who cannot go the distance
only to arrive here
at this unacceptable rest
monastically planting
the pathless map
knowing not why we came
unwilling to stop
yet unable to pass?
It is here where the few of us
who lasted perish
one upon the other
hand and arm woven
like lattice bone
century after century
body rotting to body
making an impenetrable wall
others will spend a lifetime
debating.
And you too are coming
almost mad nearly lame
begging direction
high in mind
measuring for the climb.

We are honored guests
at the long table
swiping what hibernates
in the depths of our neighbor’s plate,
divining prosperity
in the clots of his wine,
staining our hands
in the crotch of his wife,
while a spite of kinds
kickback our tactics
like termites with dynamite.
The host has yet to arrive
but we know he is someone grotesquely old
from whom each of us derives
by testes deeper than the ecclesiastic.
Will we see the geezer
when he is finally here?  Gossip
has it he is grandiose as the cosmos
yet withered to mere semantics.
A laugh passed around
tastes of catastrophy’s history
persisting in masticated meat.
The lady serving says he is damaged,
caught redhanded reconstructing
the flaws of self-salvage.
All we hear is sawing. No hammering. 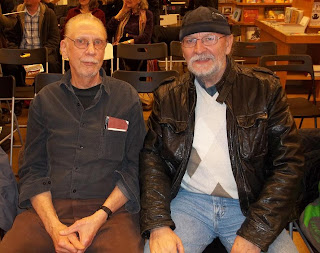 All photographs are the property of Janusz Zalewski.

The poems were amazing. thanks for posting this.

A great post! I enjoyed the story, the poems, and the photographs. Thank you, Douglas, Janusz, and John. I always look forward to reading this blog, keep it coming.
Best wishes,
Stephen Poleskie